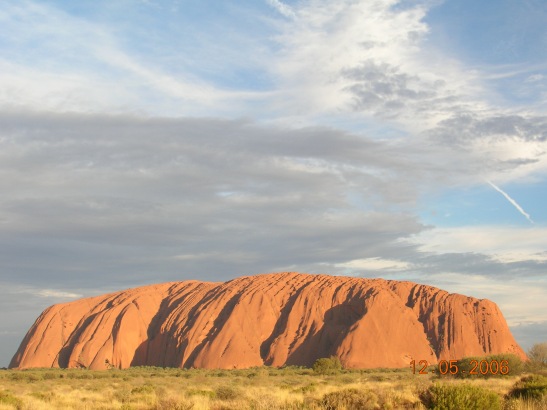 She sat on the floor in one of the main halls of the Cultural Centre—shoulders hunched, working on a painting; her dark blue frock-style dress fanning out around her. The painting was colourful, with swirling dots morphing into circles, telling Tjukurpa tales. A little further away lay four or five boat-shaped bowls containing grains that were very similar to ragi.

As we approached, she took one look at us and delightedly rubbed her skin with her fingers, and then reached over to touch my son, saying something to a park ranger nearby. The ranger translated, “Barbara says ‘aborigine’.” We nodded, adding that we were from India.

In her own way, Barbara was seconding what archaeologists have long postulated: the parallels between the races of Central India, Sri Lanka and the Anangu, as the aborigines of Australia like to be called. Archaeologists estimate that the Anangu have lived in the southern continent for at least 50,000 years, continuously adapting their way of life to the vagaries of plate tectonics (it is believed that, once upon a time, Australia had a land connection to Asia) and the changing landscape.

From the plane, it had been difficult to imagine Australia’s ‘Red Centre’—about 1,86,000sq. miles of heat and desert in the heart of the Outback—had ever looked any different.

Large amoeba-shaped salt beds spread out sporadically on the dusty landscape. Smaller discs of burnt bushes were the only alternative colour to the pearly white of the salt beds and the rusty red of the mud. The lone road from Alice Springs, some 450km away, snaked languidly through the forlorn, forbidding territory.

Then, in the distance, the plains gave way to a single reddish-grey protrusion rising from the desert floor. This was our first sight of Uluru, as it is known in Pitjantjatjara, a language of the Mutitjulu aborigines indigenous to the region, or Ayers Rock, as it was earlier popular.

In the 130-odd years since its first sighting by a non-aborigine—the explorer Ernest Giles— Uluru has acquired iconic status. One-tenth as tall as it is wide, at 348m, and composed of a single piece of arkrose (a grey sandstone), the rock is Australia’s best-known natural landmark, with its own national park—the 1,325sq. km Uluru-Kata Tjuta National Park is now a World Heritage Site—and a resort with its own airport. In 1985, ownership of the national park reverted to the Mutitjulu Anangu, who now manage it jointly with the Australian National Wildlife and Parks Service. Contrast this with Gilbert Hill in Andheri, Mumbai—estimated to have been formed only a few million years after the Uluru—which is surrounded by jhuggis and high-rises, and was only recently included in the state’s Grade II Heritage List.

Vital to even a nominal understanding of the significance of Uluru to the Mutitjulu is an awareness of Tjukurpa, a catch-all term the Anangu use to refer to many concepts—the period during which, they believe, celestial beings created all the elements of their surroundings (rivers, mountains, plants, animals), the stories surrounding this creation and the rules that govern their interactions with each other and with the environment. Because the Mutitjulu language (as is the case with the other aborigine languages) does not have a script, Tjukurpa is passed on from generation to generation through stories, ceremonies and art—such as the painting Barbara was creating when we met her.

Less popular than Uluru—but equally significant to the Mutitjulu—is another rock formation, Kata Tjuta, about 30km west of Uluru. Also known as The Olgas (Giles named it after Queen Olga of Württemberg), it is a group of 36 red domes that are separated by valleys and gorges, which visitors can hike through.

The Mutitjulu believe that they are the direct descendants of the beings that created Uluru and Kata Tjuta. Although they are prohibited from sharing all of their knowledge about the origins of Uluru and Kata Tjuta with non-aborigines, the walls of the Cultural Centre at Uluru are filled with enough Mutitjulu lore to leave you with the idea that the rocks are central to their way of life—particularly religious life—many rituals of which are performed on and around the rocks.

The rocks stand as physical evidence of the events narrated in the Tjukurpa (for example, a long swish on one of the faces of Uluru is the mark, so the story goes, of a poisonous snake’s tail as it fought with a python). The stories are at once alien and familiar. As an Indian, relating to mythology came naturally, while the stories themselves, and the enormity of their significance to daily Anangu life, remained strange and fascinating.

No less fascinating was the instant connect with Barbara, a Mutitjulu. With the park ranger playing translator, she satiated our curiosity about Anangu life.

“What is that?” asked my son, pointing to the bowls around her. “They are grains. Women gather the grains and the men hunt,” Barbara explained. Collecting even a handful of grains from the harsh terrain must be a formidable job, I thought. “It’s hard,” she said, as if reading my mind, adding that successive generations of girls and boys are taught these bush survival skills. She picked a few small fruits from another container, peeling one of them. “I get my colours from these.”

As more people streamed into the room, we took our leave and headed towards the perimeter of Uluru. From a distance, it had appeared smooth and unblemished; up close, it was full of pockmarks, crevices and cracks. We drove around it, slowly, recognizing the many indentations from the stories we had just read at the Cultural Centre, stopping frequently to marvel at the stark landscape to one side, and Uluru on the other. At a waterhole, our last stop for the morning on our Uluru circumnavigation, the path led us into a cave with some well-preserved drawings on the ceilings and walls.

We were back at Uluru half an hour before sunset to catch the play of the fading light on the canvas of rock. The rock took on a golden hue, turning steadily more orange until the sun dipped into the horizon. Our feet rooted to the ground, we fixed our sights on the rock, trying to commit this seemingly mundane but truly extraordinary occurrence to memory.

Perhaps it is the Mutitjulu lore. Perhaps it is being in the presence of someone like Barbara, who can trace her ancestry for tens of thousands of years. Perhaps it is the cave drawings, possibly the first real ones you have ever seen, but being there, in the shadow of Uluru, is downright thrilling.

There are purely geological explanations for the existence of the rocks, and then there is the Tjukurpa. Whatever it is you choose to believe, the experience of Uluru is an intensely personal event. You have got to be there to feel it.

How to get there:

Flights to Uluru from India require two stopovers—one, in Singapore, and one at an Australian gateway (Sydney, Melbourne, Darwin, Cairns). Round trip economy fares on Singapore, Thai, Emirates, Qantas are about Rs1.22-1.6 lakh.

Head to the resort’s Shopping Centre for many food choices—at Geckos Café, enjoy Mediterranean pizza and hot chocolate. Kuniya Restaurant serves indigenous flavours. There’s a well-stocked grocery store if you intend to rent an apartment and cook your own meals.

Go on an Anangu-guided tour. Learn bush survival skills. Hop on a camel—or a Harley—for a stately two-hour circumnavigation of Uluru with an expert guide. Try a guided walk of the Olga Gorge at Kata Tjuta. Try your hand at creating aboriginal art at the Cultural Centre (what a great memento to take home!). Tour prices—there are more than 20 options—range from A$70 to A$200 per person. For children, generally pay half. There is a A$25 fee for entering the national park; the ticket is valid for three days. Make tour and restaurant bookings through the resort.

Originally published in 2007 in Mint Lounge.

This entry was posted on October 19, 2007 by Sujatha Bagal in Published, Travel Writing and tagged Australia, Children, Mint.