A Peek Into a Kitchen of the Past; Avalakki (Pressed Rice Flakes) Recipes

This essay was originally published on The Aerogram.

When the fire is good and ready and a quick wash of the hands later, Shakuntala Bai puts on some water to boil — water stored in a tank in a corner of the kitchen and to be used only for cooking. She readies the large cast iron pan on which she will make chapattis or bhakris (rotis made of jowar flour). She walks over to one of the shelves carved into the wall where she stores her grains and other groceries, and picks up some flour in a vessel and adds a little bit of salt. Then she squats on the floor in front of the stove and kneads flour with the hot water and salt for bhakris.

Once she finishes prepping the dough, Shakuntala Bai places the cast iron pan on the stove, checks the fire and fiddles with it a little until she’s satisfied. She moves a little so she’s in front of the large, round, smooth Shahbaz stone placed strategically near the stove. She flours the surface and pats small balls of the dough into circular shapes on the stone, her palm going pat, pat, pat on the stone, constantly moving in quick semi-circles so the bhakris turn out evenly round. With darting movements, her fingers dab drops of water on the now expanding circle to fix cracks and then some flour so it doesn’t get stuck on the stone. Water, flour, water, pat, pat, pat. A white cloud of fine flour dust swirls in the air around her. 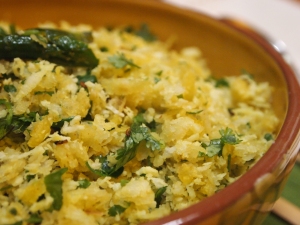 Avalakki is a staple in North Karnataka cuisine. Avalakki Uppittu, a type of semi-dry porridge, is a popular breakfast dish. The rice flakes are also used to make quick snacks eaten late in the afternoon. A few basic spices and ingredients are all it takes to turn avalakki into dishes that are flavorful but light. More elaborate preparations of avalakki (such as Chivda) are made once in a while in large quantities to pack and take while traveling or to share among family and guests during festivals and religious observations.

This entry was posted on October 19, 2015 by Sujatha Bagal in About, Food Writing, Published, Stories and tagged Aerogram, Culture, Family, Food and Drink.